Porter Airlines is growing its presence in New Brunswick with the official arrival of its first flight to the provincial capital of Fredericton. Flights operate daily between Ottawa and continue to downtown Toronto. Connections to other Porter cities are available from both locations. 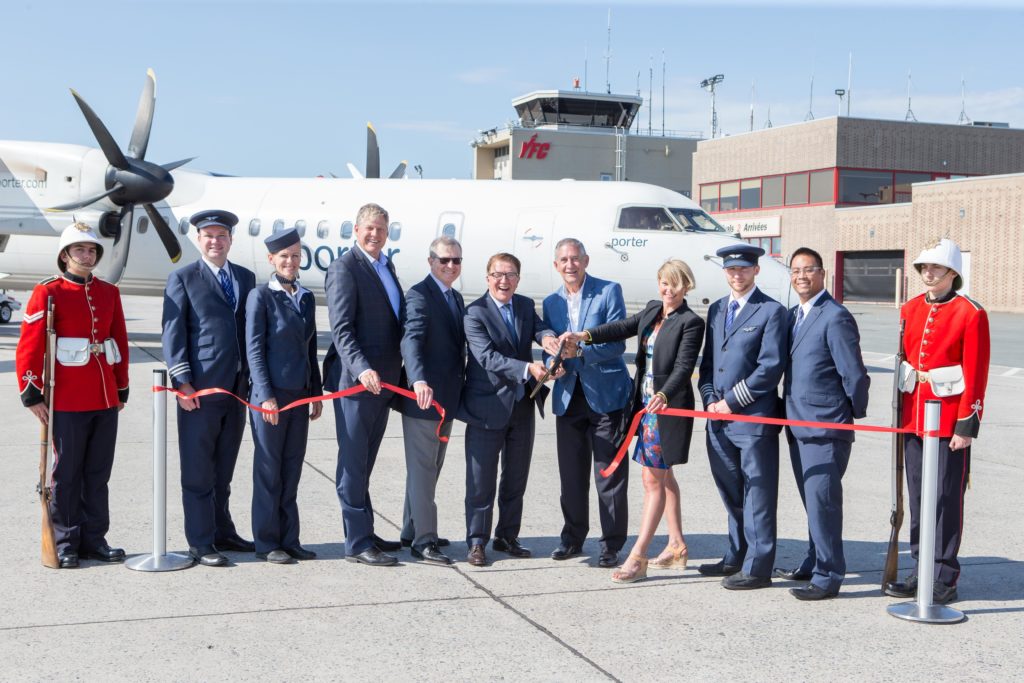 Hundreds of locals greeted arriving passengers with fanfare that included a bagpiper, Garrison District guards, maritime cuisine and music. Politicians and other community leaders were among those participating in arrival ceremonies.

“The enthusiastic welcome for our inaugural flight is something that we want to build on to ensure Porter has a long, successful presence in Fredericton,” said Robert Deluce, president and CEO of Porter Airlines, after arriving on the flight. “We believe that the desire for competition and lower prices will encourage more people to fly and consider Porter when they do.”

“The arrival of Porter Airlines is great news for Fredericton’s economy and will definitely benefit leisure and business travellers across the region,” said Fredericton Mayor Mike O’Brien. “We’re growing and air service is growing with us!”

“We’re thrilled to come together with our entire community in welcoming Porter to Fredericton,” said Johanne Gallant, president and CEO of Fredericton International Airport Authority. “Our businesses and residents are excited to have this new option for accessing key markets and leisure travel. Porter’s arrival is great news for New Brunswick’s Capital Region.”

Porter’s home base at Billy Bishop Toronto City Airport is known for its proximity to downtown Toronto; just 2.5 km from the central business and entertainment districts. Porter provides a premium experience for all passengers, including leather seats, complimentary wine and beer onboard, and airport lounge access. Its “flying refined” philosophy has helped the airline win numerous global awards.

“As Canada’s capital city, we welcome connectivity to all parts of our nation, but we especially appreciate expanded non-stop service that is being provided by Porter Airlines to provincial capitals, like Fredericton,” said Mark Laroche, Ottawa International Airport Authority president and CEO. “Porter committed to this community when it chose YOW as its inaugural destination more than 10 years ago. Their continued growth among government, business and leisure travellers since then is a testament to their high standards of passenger comfort and reliability.”

Porter Escapes vacation packages, including air and hotel, can be booked at www.porterescapes.com. Fredericton packages for Ottawa departures are currently available for two nights starting at $400 per person (includes all taxes) on select October dates. Two-night stays in Toronto, departing from Fredericton, are $450 per person during the same period.

Porter has operated in New Brunswick since 2010. It is also preparing for its first flight to Saint John, N.B., on Sept. 21.

About Porter
Porter Airlines has revolutionized short-haul flying with a warm and effortless approach to hospitality, restoring glamour and refinement to air travel. Porter is an Official 4 Star Airline® in the World Airline Star Rating®.

Vacation packages are available from Porter Escapes at www.porterescapes.com or call (855) 372-1100 for more information.

About the Fredericton International Airport

The Fredericton International Airport (YFC) serves over 377,000 passengers annually and offers direct daily service to the major hubs of Toronto, Montreal, Ottawa, and Halifax, along with seasonal service to sun destinations. Through direct, indirect and induced economic activity, YFC brings 513 jobs, $8.5-million in taxes, and $24-million in GDP to New Brunswick every year.