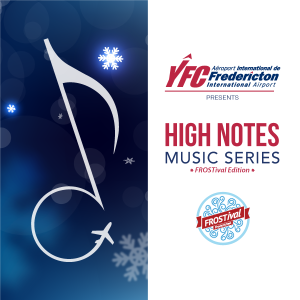 FROSTival comes to the Fredericton International Airport on January 23 with the launch of a new installment of our popular High Notes Music Series!

FROSTival is Atlantic Canada’s largest winter celebration, and it’s right here in Fredericton. We’re hosting the Old Fashioned Skating Party again this year, but we wanted to try something a bit different, and so we’re also bringing FROSTival into the airport with a performance by a different local artist each Friday between 10:00 a.m. and 12:30 p.m.

Join us for acoustic performances by: